Just watched this video from a colleague at work. It is an example of "Target Focus" - the exclusion of other information when performing certain tasks. This can be a problem if you are a dive bomber, as you may not pull up in time due to this focus of concentration. :-)

What has this to do with BPM Visualisation? Well, usually you only really need to present the information required for a particular task when viewing a process model, as the other information is either ignored, or becomes a hinderance to the task. The human visual attention system accomplishes this quite well, as you discover in the video. The question is, can we develop good psychological models to filter useless information for task-oriented visualisations. My impression is (at the moment) that at this moment in time the process visualisation community is lagging behind the other visualisation researchers and practitioners in using this approach.

As a counter argument, the removal of too much information may hinder the process analysis task at hand just as badly. So effective task-oriented process perception models may be a good research area to develop, to fine tune visualisations to a deeper task oriented level, past higher level role oriented information filtering that is presently proposed.

What do you think?

Posted by Unknown at 4:52 PM No comments:

How to Misrepresent a Process

Carbon trading has been a topic of discussion in Australia recently, and everywhere else. An issue in Australia has been the predominance of coal powered electricity generation. These facilities will be hit hard by the new greenhouse gas economy, and have to prepare for change.
However, what is peeving me is the representation of the power plants by the media, even good old Aunty herself, the ABC. Every time they take a camera shot over a power plant (VOD Cast for 21st March 2008), they focus on the large concrete towers that emit steam, not CO2. The towers are a part of the water reclamation process. They conveniently emit lots of billowing clouds of water condensate that looks like smoke, and so are a lightning rod for emotive media representation of the power generation process.

It's probably just an honest mistake, as the camera views of the billowing towers are impressive, but it shows that such misinformation via visual misrepresentation can give you a completely inaccurate view of a process. In effect, they chose the wrong icon to represent the activity, and now some people are going to have the wrong idea about the process of electricity generation.

BTW, the dangerous stuff comes out of the skinny chimneys nearby. :-)

Ross
Posted by Unknown at 3:41 PM No comments:

As mentioned in my previous post, I have been following a discussion on the uptake of BPMN functionality. Basically, the debate revolves around the actual number of BPMN components being used, and the lack of uptake on many of the components devised by the OMG. This is an exceedingly complex issue, that I cannot fully comment on due to my nascent knowledge of BPM, having defected so to speak from the gaming community.

However, I can't help but wonder if the issue here is to do with the visual nature of the diagrams, and their interaction capabilities. Most software I know of that uses this standard presents the diagrams in an inanimate, low-level interactive manner. While this works well for certain stakeholders in a process modelling scenario, it does not bode well for those that think in a different manner, especially if they are new to the field. For instance, you model the business, and then show the user the model and expect them to understand easily. I think a static diagram does not work here for people who are not BPMN experts.

Would more components be used if it was clearer what these icons meant, and what they model? Most of the time we avoid software functionality as it is too hard to find out its usage. And no, RTFM just doesn't cut it as a methodology, because we usually learn by doing, and the doing requires tools that clearly show their functionality.

I think a lot of pedagogical theory could be applied here to look at how animation could be used to show the functionality of the diagram. Not in a simulation manner, but simply in a base functionality level. The user could use a tool to brush over the diagram to generate animations that indicate node or group levels of functionality.

For instance, as an icon is inserted into a diagram (xor-split say), it could animate itself judiciously to indicate that one or the other choice in the branch is made, and not both.

This technique has been applied in other visualisation fields, and I think it could work here.

Ross
Posted by Unknown at 4:01 PM No comments:

Some humour about business process visualisation

Found this Youtube video on Infosthetics.com. Watching the "Dude" scatting cracked me up. Yes, it is stereotypical in nature (it is from 1971), but boy does it make a statement about the imagination levels of certain people...in that inimitable cute muppet way.

Have been following a conversation between Michael zur Muehlen and Bruce Silver on the usage of BPMN functionality. Can't help thinking that maybe there would be more uptake if the "Dude" designed the diagrams... ;-) 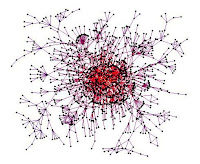 Came across this article in Bruce Silver's BPM Watch blog about organising complex BPMN models. He details the use of a VISIO tool add-in for such a hierarchical organisation, but I think more can be done. Visualisation researchers have long been looking at real-time traversal of graphs, like the large social network graph image in this blog entry, and their hierarchical structures. These methods I believe can be modified to suit the tasks required by BPM stakeholders; from users to modellers, each with their idiosyncratic requirements.

Makes me excited that other people are seeing such needs, and are looking for improved tools.

Ross
Posted by Unknown at 5:39 PM No comments: 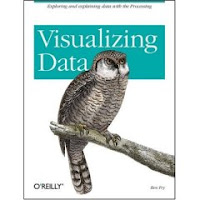 Have just picked up a copy of Visualizing Data by Ben Fry, (thanks QUT :-) ), and it looks like being a useful resource for practical visualisation of large data sets. It also comes with a Java-based tool called Processing, which was developed during the Author's time as a PhD student.

Will be useful in my teaching and research, but also should prove a useful tool for future implementations of visualisation systems in BPM. Will give more info as the book is read and the programs are written. You might even see examples of the programs on this blog.
Ross
Posted by Unknown at 11:23 PM No comments: