Programs must be written for people to read, and only incidentally for machines to execute - Abelson and Sussman

So, applying this to process models, does this statement hold?

US Marine Simulation via Mixed Reality

Continuing our military theme for the past few weeks, here is a great video on the simulators used for Marine training. The system is mixed reality in nature, incorporating environments that simulate Iraq and Afghanistan based scenarios.

Interesting to note the emotional responses of the recruits during the exercises. A key factor in the use of these simulations is to immerse the participant in the feel of the whole environment. Using a mixed reality setting goes a long way to assisting this process.

This has its applications in business processes as well. Even in business, there is an emotional component to a business environment that needs to be experienced in order to have the correct idea about the processes being performed. This is especially required for training applications with people. The health sector realises this, and has sunk a lot of money into health worker training simulations. However, to model the feel of an environment takes a lots of work to get right.

Which should keep me busy in my research for some time yet.

Ross
Posted by Unknown at 2:14 PM No comments: 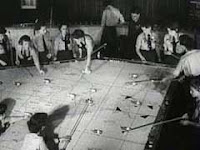 Was watching an old WII propaganda movie on Auntie (Australian ABC) the other night. Found the Command Centre system used by the British quite fascinating. The UK had an advanced warning system of people listening for bombers on the coast. This was then relayed to HQ, and a visualisation setup, with two screens. One for detection purposes, where the bombers were plotted at regular intervals, and another table for interception preparation.

This interested me due to the visualisation analogs from over 60 years ago. Tables displayed regular updates on bomber and interceptor movements, along with a division of visualisations into different tasks - interception planning and monitoring. All of this tied together with much human input, to provide interactive updates on information, but not in real time...that comes with computers and sensors.

Reminded me of the historical background to the development of real-time computer displays and visualisations. Everything we do now in Info. Vis. has had an analog in history, performed manually.

And I thought I was being original. :-)

Ross
Posted by Unknown at 3:50 PM No comments: