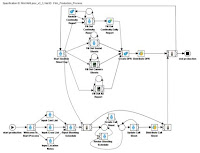 My intern student from France has been very busy, and has completed his project with me at QUT. We now have YAWL and Second Life talking to each other, in a similar way to my earlier work with Half Life Two in previous posts.

I have embedded a video from Youtube of the system in action, titled Clik Goes to Hollywood. What we have done in effect is to facilitate the 3D collaborative visualisation of dynamic business process models. The visualisation has been developed from the 2D YAWL control flow model illustrated at the top of this post, into a 3D animation in Second Life, embedded below as a video. The process model illustrated is drawn from the YAWL4Film project being undertaken by the BPM Research Group at QUT. Clik, the avatar in the animation, is not controlled by a human, but is controlled by the YAWL workflow engine.

More will be revealed as I duly publish some papers...