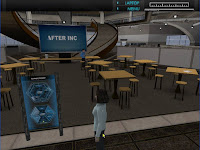 In November 2007, IBM launched a serious game for people to learn business process modelling called Innov8. This is another example of the avalanche of serious game applications that have been developed, exploiting the educational properties of games in areas ranging from the military, to emergency workers, and now to business process modellers. I will be downloading it, as soon as IBM authorise my application. I will then report on its value as an educational tool.

But until then, it looks like a first strike on the area of using virtual environments for business process management. The question is, what sort of tool support is available for devleoping such representations, and how effective is it really going to be as a modelling and educational tool. One could say that maybe the use of games as teaching tools is turning into the proverbial "when using hammer, every problem is a nail" scenario.
Ross
Posted by Unknown at 6:17 PM